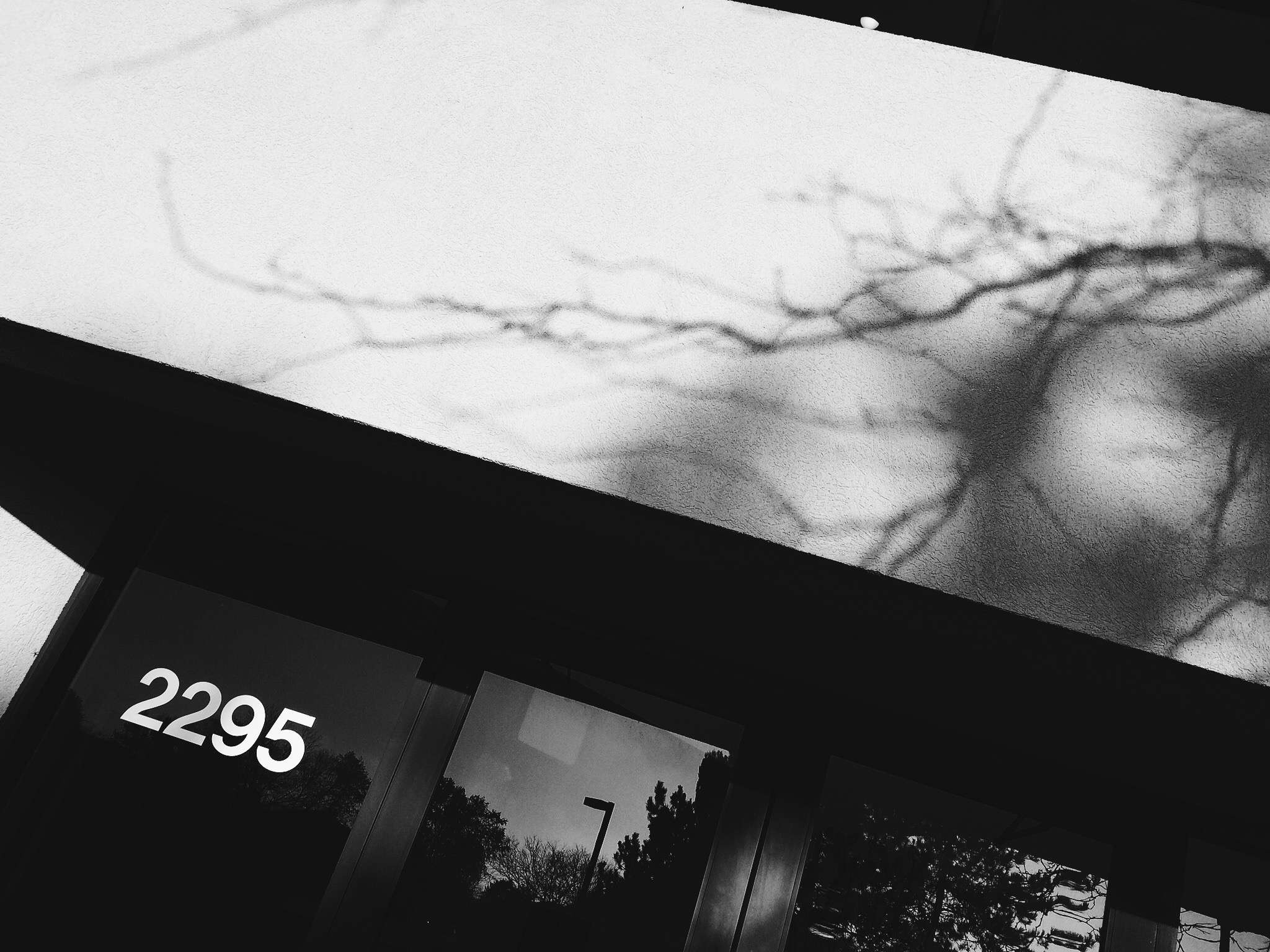 2295. That’s what Jasan and I term the office. This is the building where I work. I have a new job and I am loving it so much. Because I can’t entirely work a full day yet, (single mom, no daycare, the boy is done with school and off the bus at 3:15 pm,) I came up with the brilliant idea of working Saturdays.

I remember very clearly the couple of times I went to my dad’s office when I was young. He was a graphic designer in my early years, and he had the coolest office. Just the whole office environment was pretty darn awesome in my opinion. It felt so “adult” and it was a chance to, for a few hours, be part of someone else’s everyday reality that wasn’t mine. Obviously because it was my DAD’s reality, it meant a lot to me. Plus, being the artistic little girl that I was, I could not get over the massive marker set that he had. I’m not talking about Crayola or Sharpie kind of markers, these were the “professional artist” Prismacolor set of markers. Not to mention, I was not drawing on typical copy paper, it was those artist pads of special “drawing”paper. ha. (This was graphic design before computers took over!) 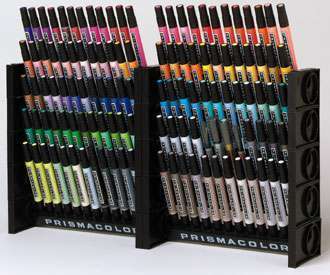 Now, with my son’s love of computers, and anything mechanical really, I figured he would love coming to the office I work in.

I was SOOOOOO RIGHT.

This Saturday will be week 5 of this experiment. I knew it would take a couple of Saturdays of just exploring with him and that I would not get any real “work” done. I was very correct about that. 🙂 But now, he knows what he wants to do when we go there and he LOVES it! (And, I can actually be productive.)

I am hoping to create a fun memory for him. 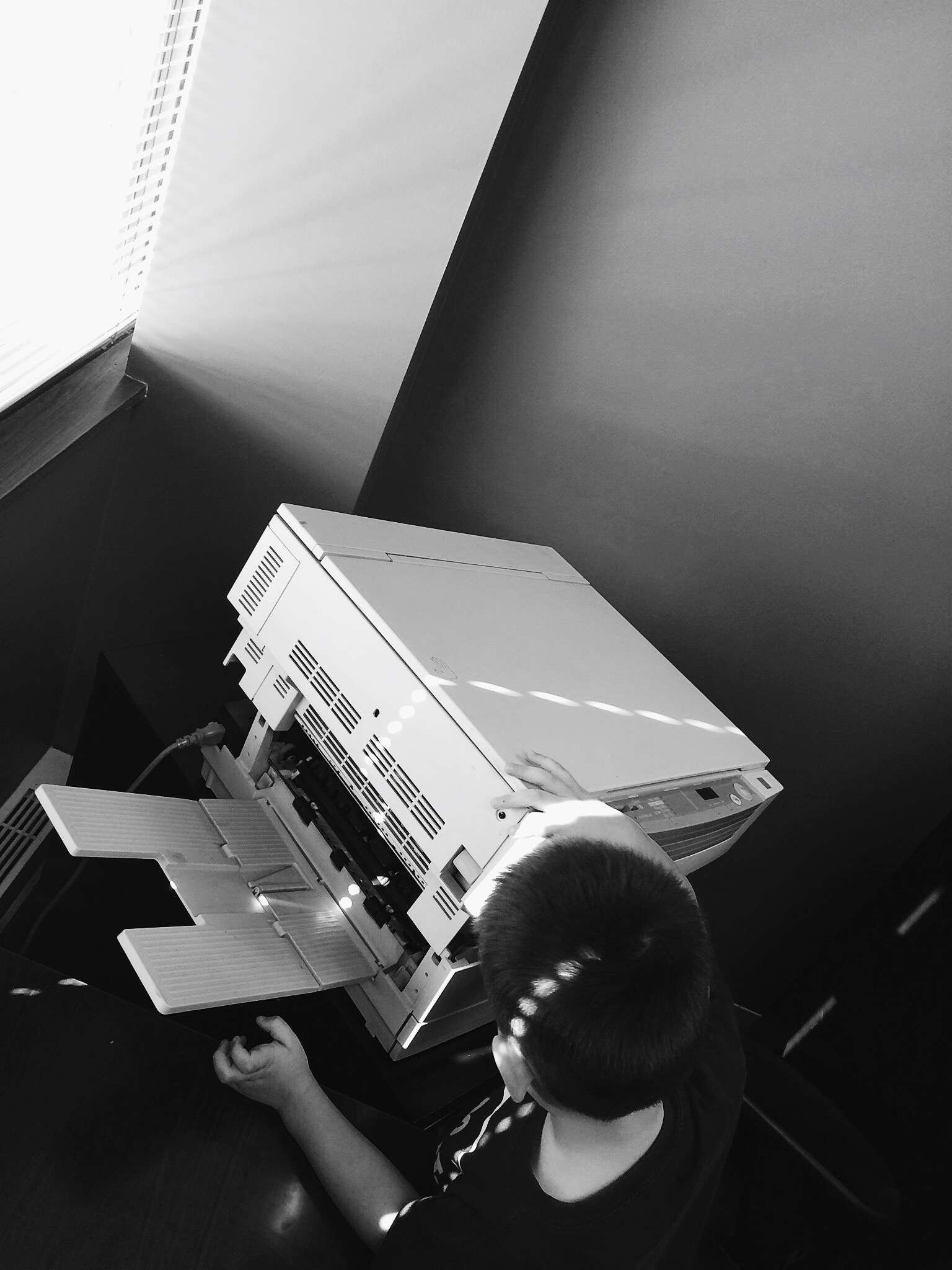 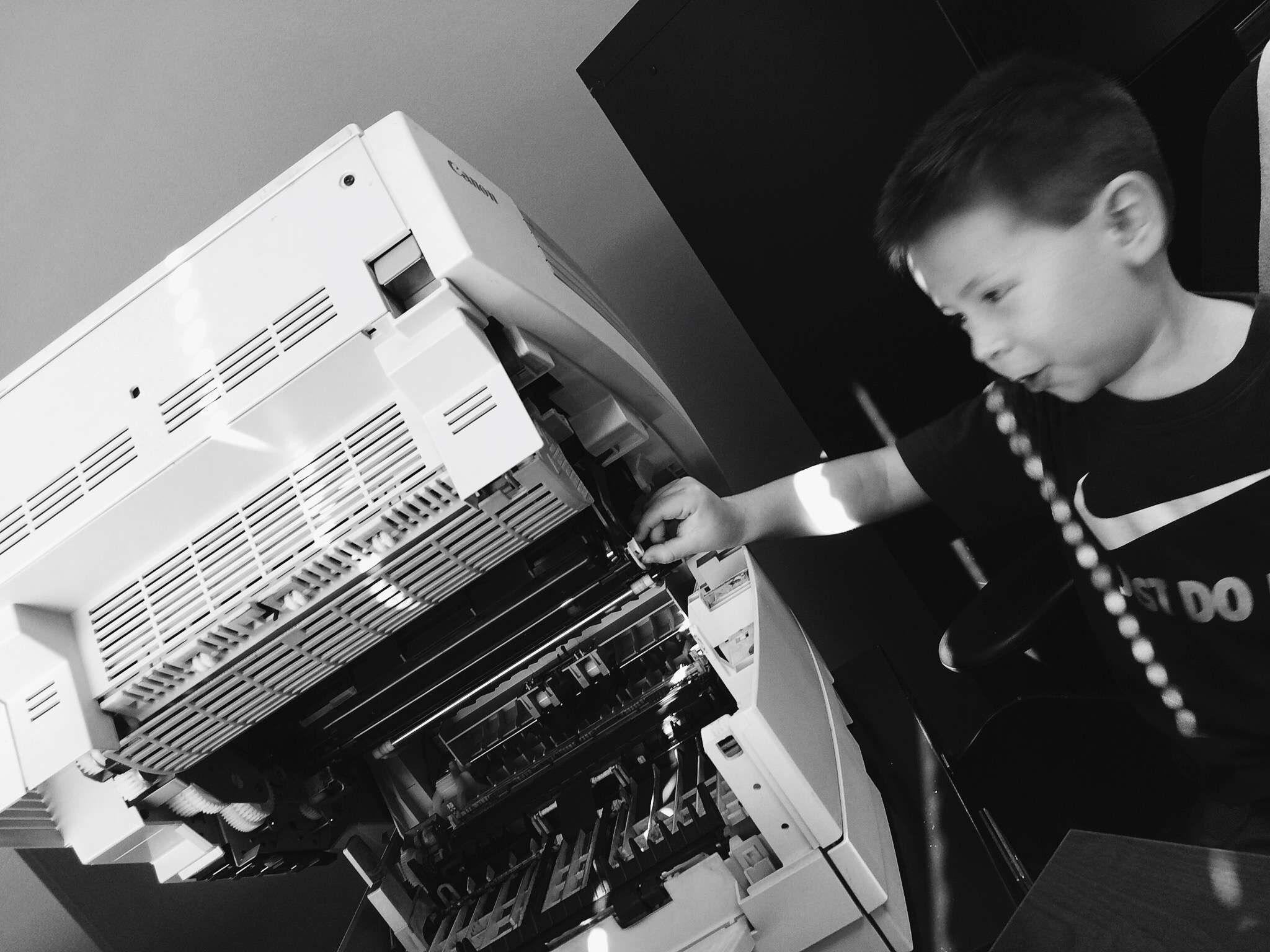 Oh man. The Canon. This puppy is a BIG hit. We hardly EVER use this tank of an old copy machine. But, Jasan has provided it some love lately because it is his new object of affection. I keep a special stack of “Jasan paper” that we keep reloading for his use. He does not care what is being copied. It is all about the sounds and the mechanics of the machine. 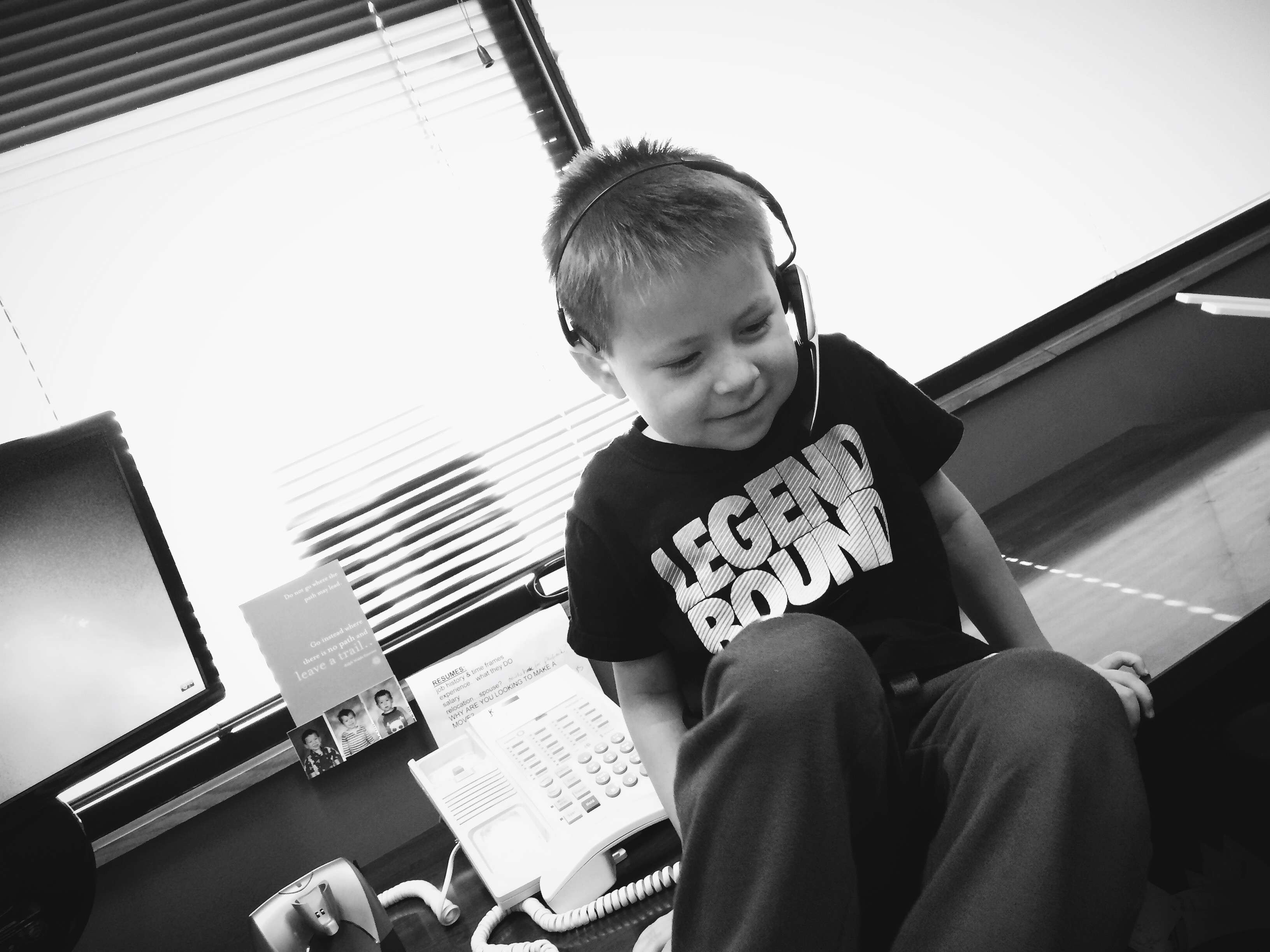 And then, Mama’s headset. (heehee. It’s just cute on him.) He was quite mesmerized by it at first. We call Grampie from the office every time and Jasan will mumble about turning computers on and off and Canon and copying, etc. (We are still not quite versed with talking on the phone. It’s pretty much a mystery to the person on the other end what the heck Jasan is saying, but it is adorable none the less. He is really trying!) 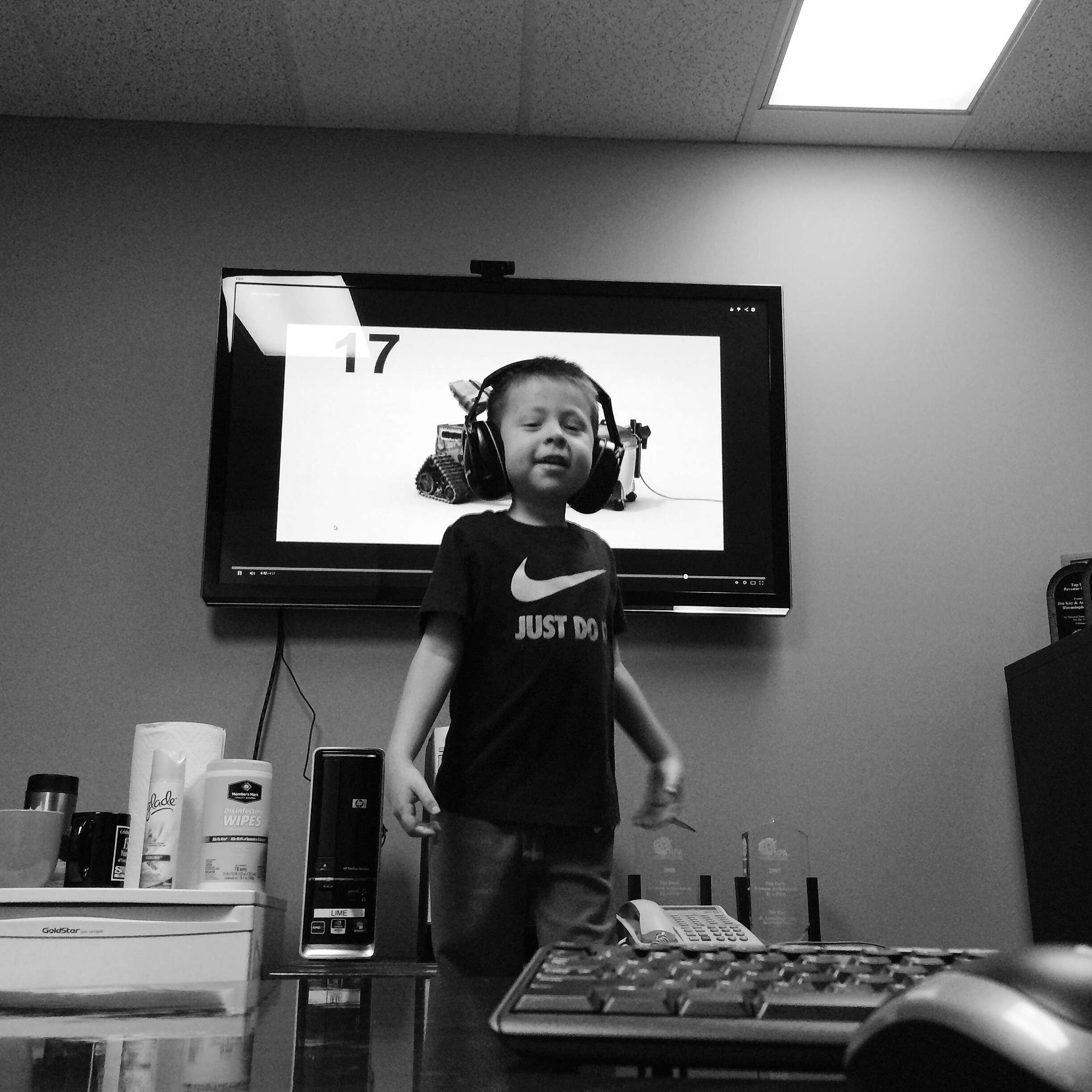 The conference room is way cool too. The computer in there is viewed on the big screen which is very handy when watching Wall.E videos on YouTube! He wears his noise canceling headphones because we also have a fancy coffee machine that is a bit noisy when you turn it on. And off. And on. 🙂

Because it is pretty much just us in the building on Saturdays, we can run down the hallway to the lunch room. Putting coins in the vending machine to get chips and Oreos (ha…his favorite!) is always a thrill. There is a key code to get into the restroom, and of course we have to spend a few minutes there each time as well.

I like that we have our Saturday “Mama’s office” routine. It fills him up with his time to explore, and I can get a few more things done that I wasn’t able to Monday – Friday with my limited hours.

And……..we are together. I love that more than anything.