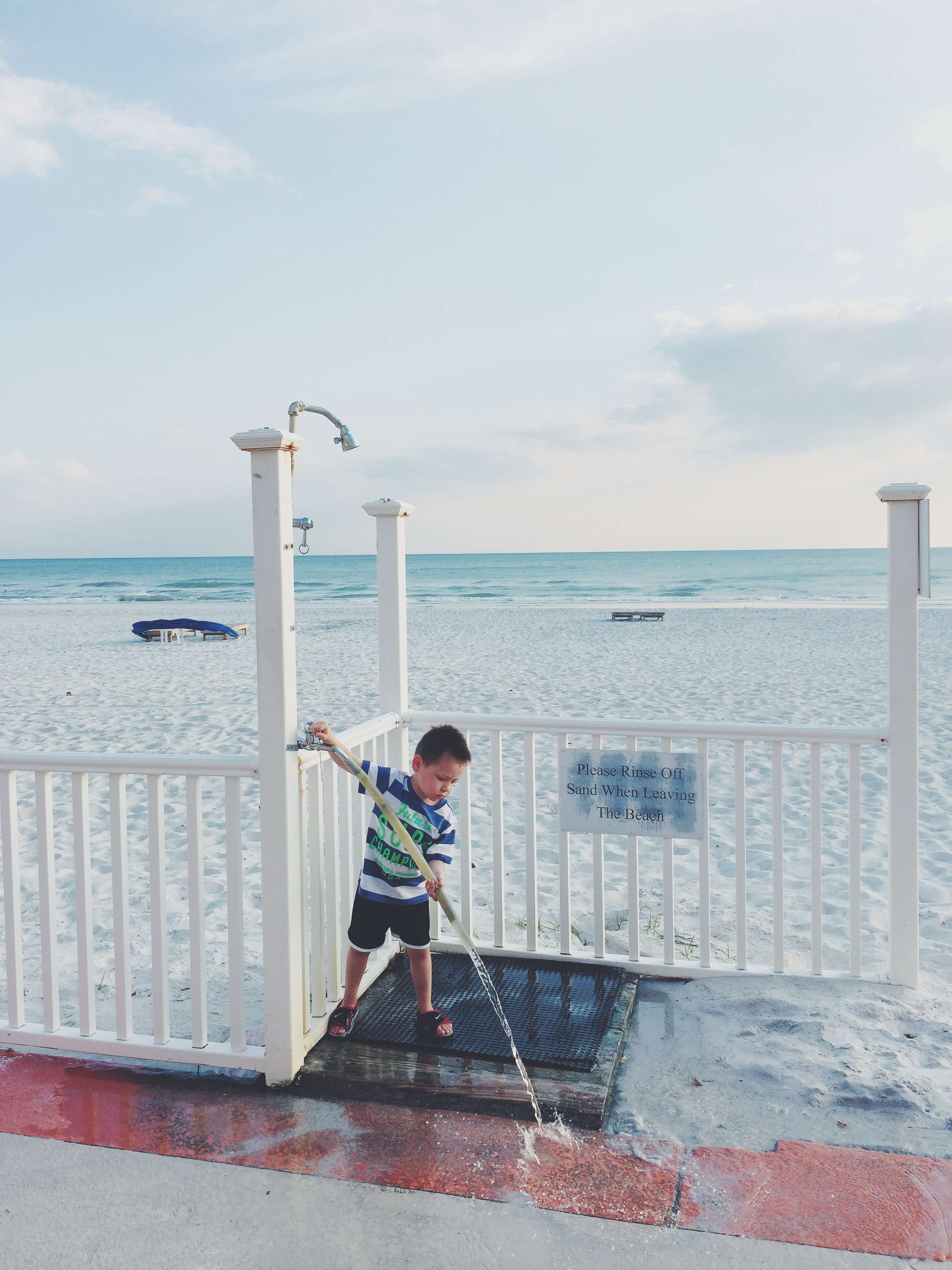 Jasan has always loved water. This makes me very happy because I too, have always been a big fan of the water. The pool, the beach, all of it. The first experience Jasan had with waves was at the age of 2 when we took a quick trip to Michigan with my father. It was a 3-day stay right on Lake Michigan at this cute little cottage. Day one was spectacular… perfect temperature and calm waters. Jasan was having a blast in the water! Day two and three the waves were up and about, and he was quite frightened to go near the water. This was the first beach experience for him and he didn’t want much to do with sand toys and such.

Fast forward 2 years and our experience at the beach was much different! He found the sand to be of some interest, not necessarily to use buckets and shovels to play with, but definitely to kick in the air. Ha! (Not so funny though, when you get sand in your eyes…good thing that didn’t occur.) The waves were a huge hit! We developed a routine. I would walk in the water behind him as he held my hands. He would lead, and we inched our way deeper into the water and CRASHED into the waves with our bodies. I would pull him up a bit with his arms so that salt water would not get in his eyes as the waves came up on us. Of course I added the “WEEEEEE!!!” sound effect with each crash. (It’s a Heidi mama thing…) 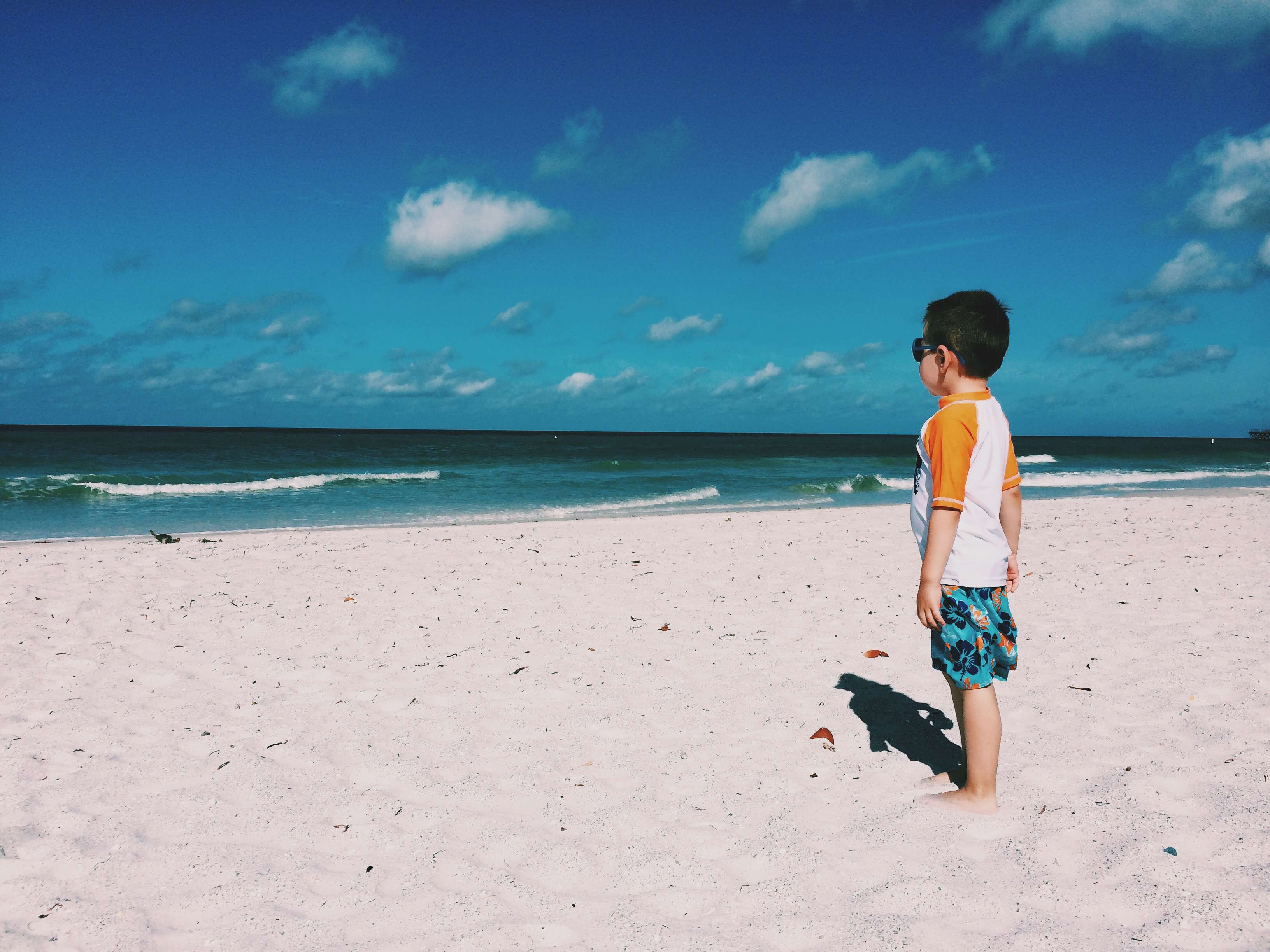 Jasan being a sensory seeker, crashing into waves makes total sense. I love how as he is becoming more aware of his surroundings he is being brave! He wasn’t afraid at all. AWESOME.

The pool is always fun. He LOVES the pool and always has. (Who wouldn’t love a HUGE bathtub?) My little dude will NOT wear floaties. He will not allow me to even get them near him. As much as the floaties would be much more convenient for me (they are so well made now that kids could literally be in the pool without you…) my thought process is, he will not have a false sense of safety in the pool. I need to be with him at all times, but I would want to be anyway. This way we stay connected and he learns how the water REALLY feels. I’m guessing this will speed up his learning curve when it comes time to actually swim.

The lovely Far Horizons, where we stayed in Redington Beach, has a pool for guest use, and is situated right on the beach. Pretty dreamy. This was great for us to have both (pool/ocean) literally steps from our hotel room. 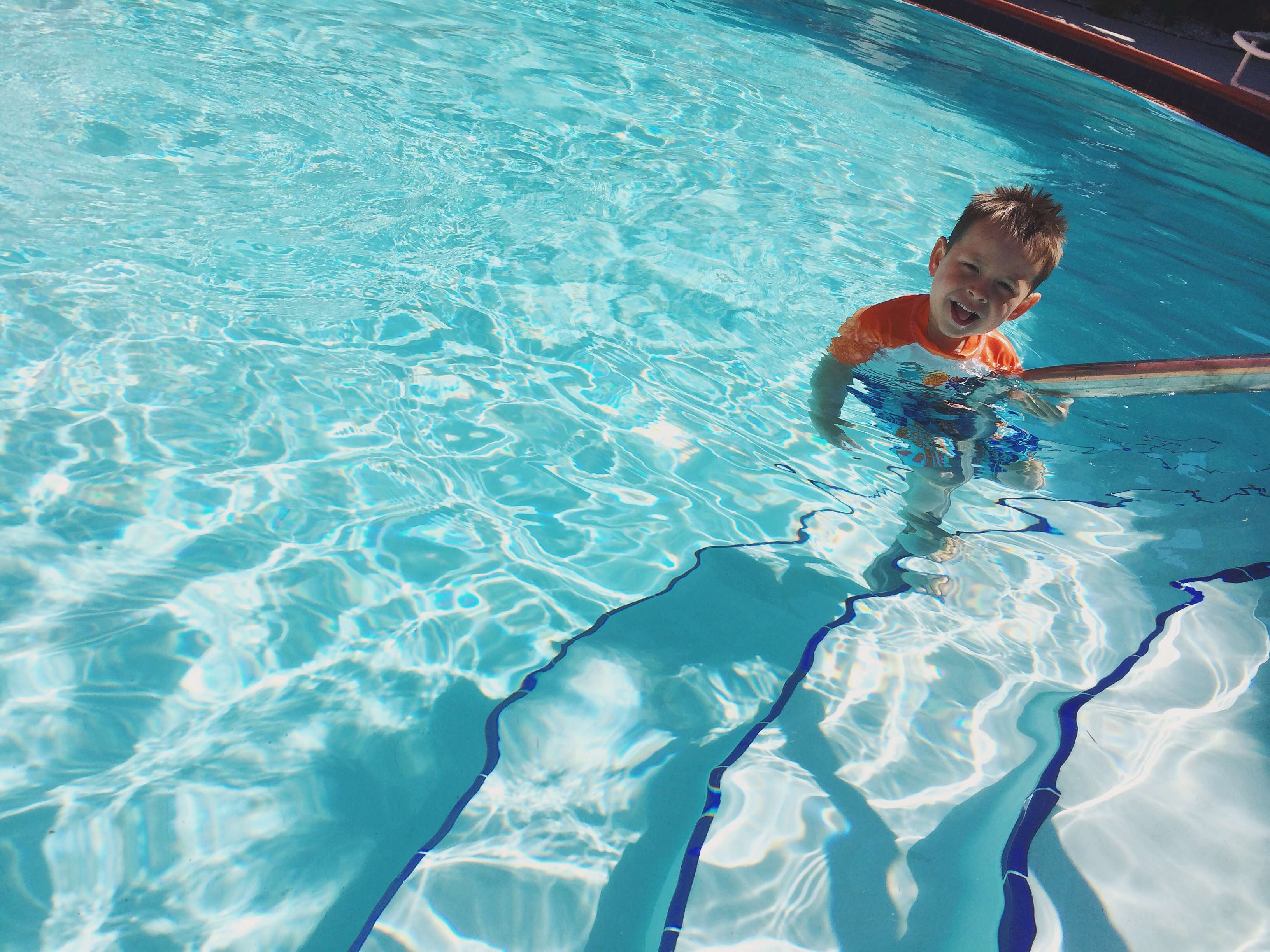 Since it had been almost a year since last when we had been swimming, it took a day for him to get really warmed up to the idea of going “under.” It was almost like he forgot that he had done it before. We had a little oops where he went under, and then it was ON. We would go under together, one at a time, hold our breath for as long as we could, float, “swim” 4 year old style…it was fabulous.

Jasan was big on GPS during this trip. It was a continuing theme the whole time we were there. It started in the shuttle from the airport. He requested my iPhone, which he does often during car trips, to load Maps and start the GPS. Then seeing the shuttle driver with his devices, his brain went into GPS & Garmin overload. (And remember, Jasan, being in our friend’s Piper Cherokee airplane, has been obsessed with Garmin ever since he first sat in the cockpit. Garmin, in any case, is always a BIG DEAL to him. It all goes back to the airplane…definitely in his “most awesome experiences” brain file.)

While we were in the pool, I would sometimes lay on a raft. He would push me out into the deep end, and would make up his own directions as I floated away. He remembered that we were staying on Gulf Boulevard, so when I would return to the shallow end and float under the railing (a.k.a. “the bridge,”) I was returning to Gulf Boulevard. Hilarious. I loved it. 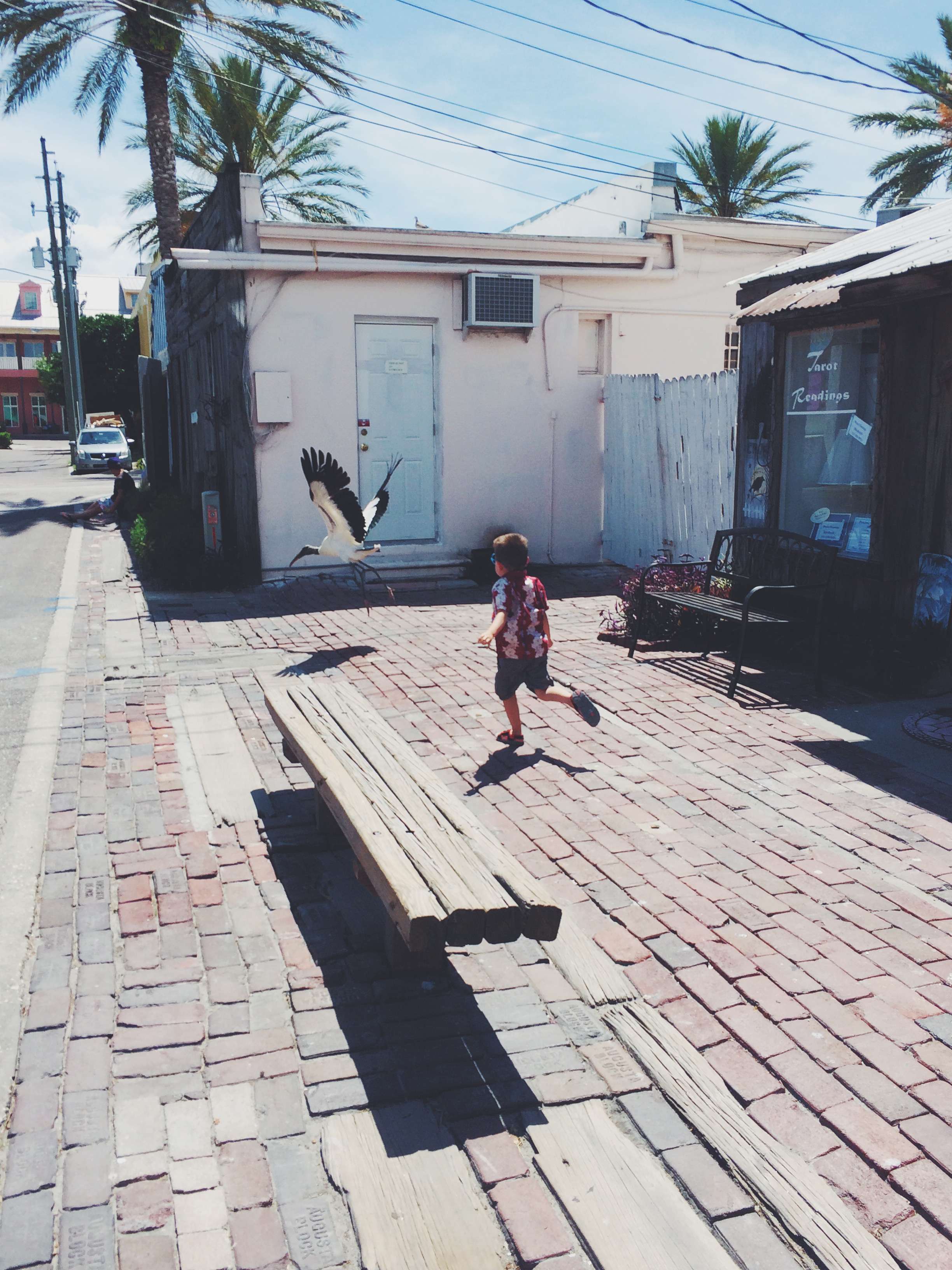 Not a new concept for all kids, but it was new one for Jasan. Chasing birds. He had never seen birds of this size before, so the fact that they were just hanging out all over the place was the coolest. And why not try to touch one? Again, awesome that he wasn’t afraid. The game became to make them fly. Most of the time, he was too quick for me to get a great shot! 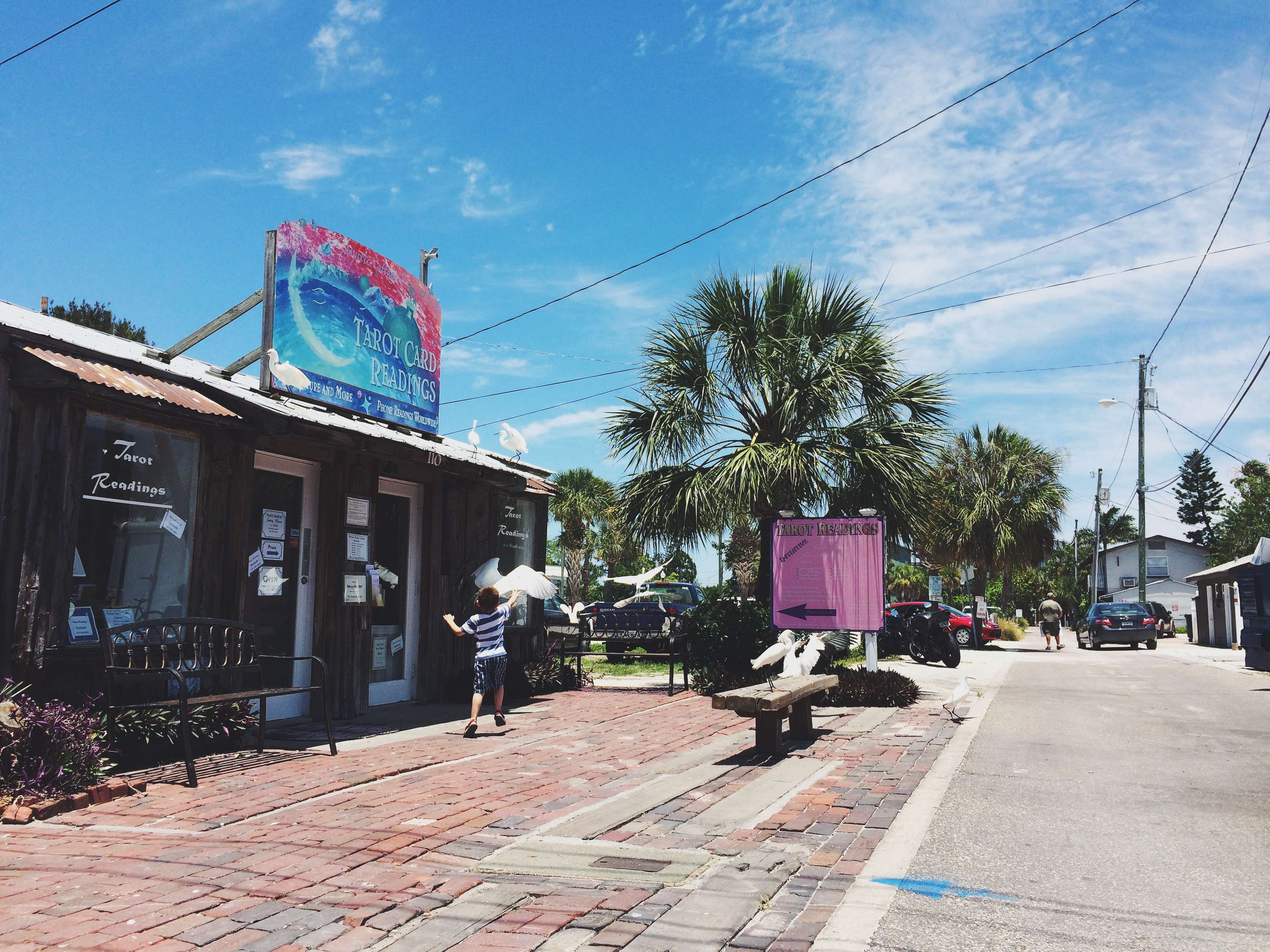 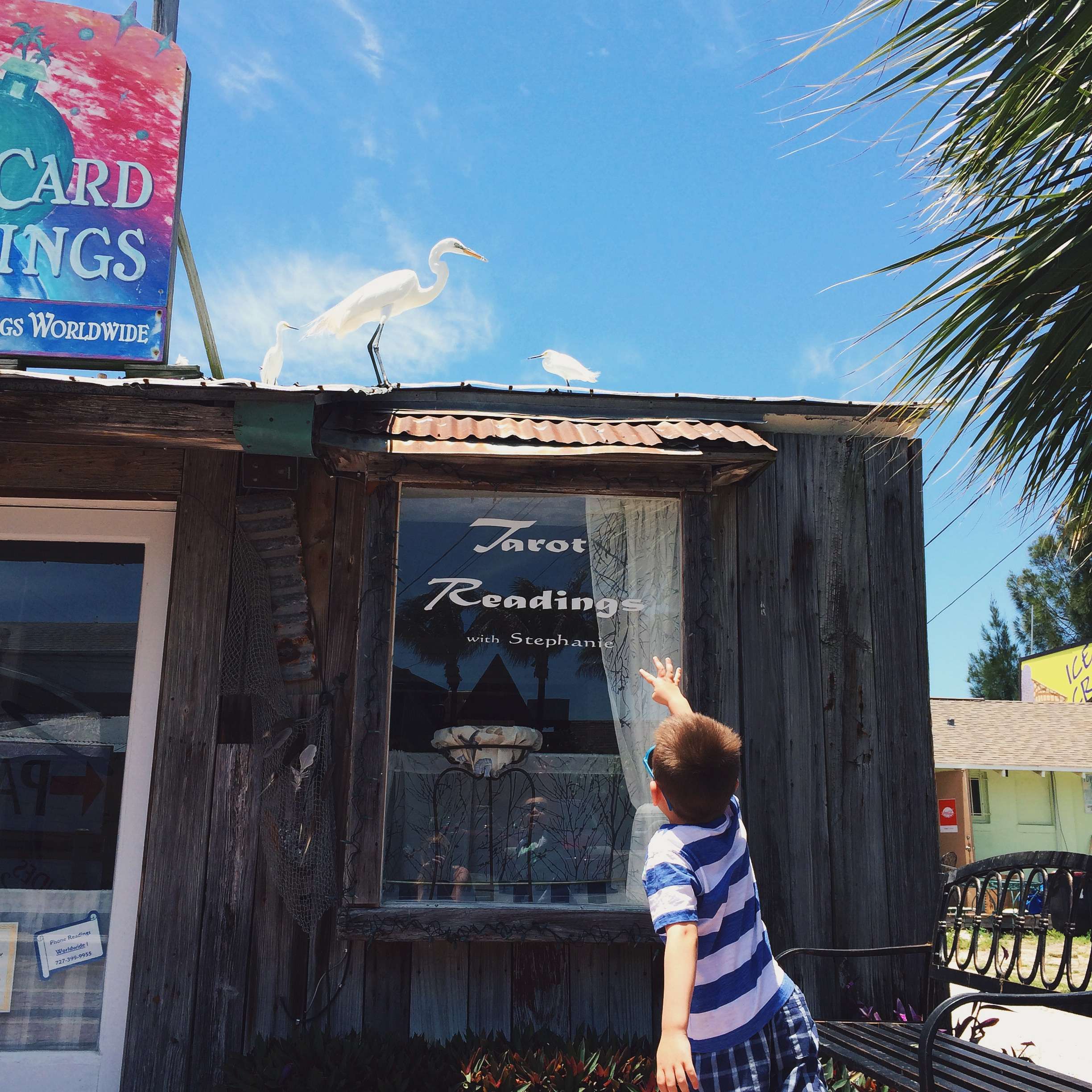 If only he could reach! He wanted me to pick him up. That made me giggle.

Unfortunately, there were a couple of cloudy days during our Florida stay. So on a day with a high chance of rain, we returned to this cute shopping area. The birds must like this spot, because they were still there. 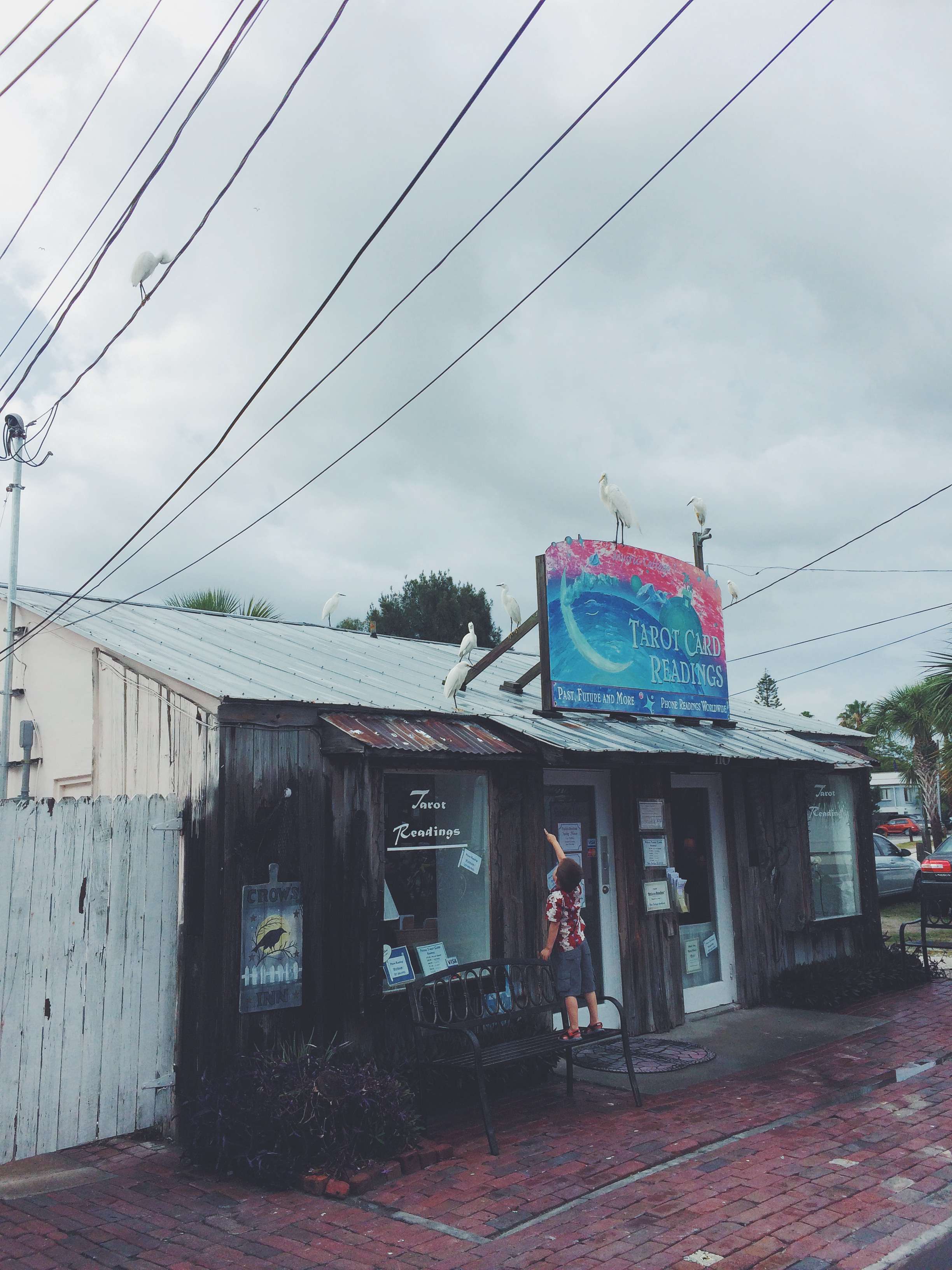 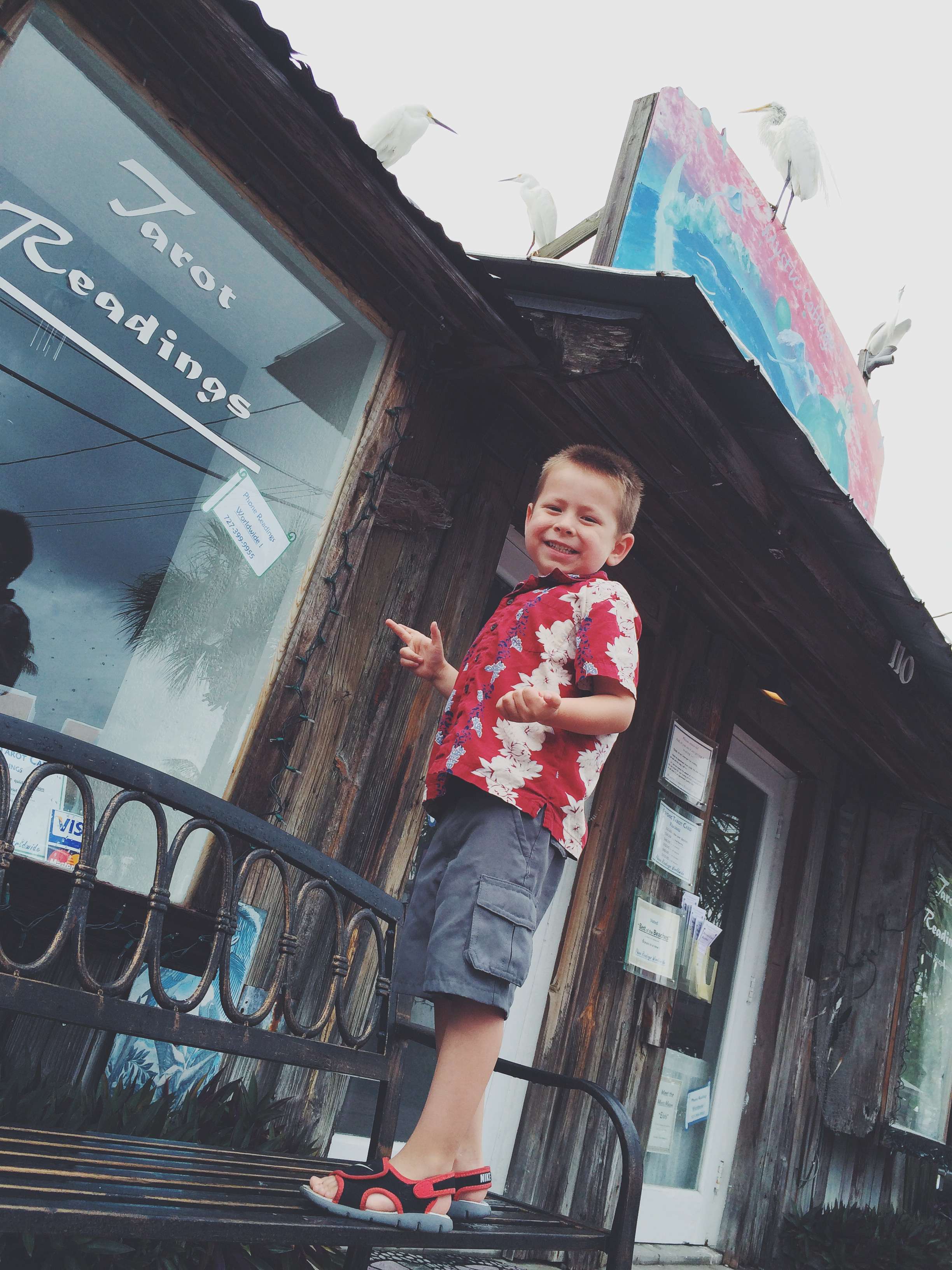 I was totally loving how happy this made him! 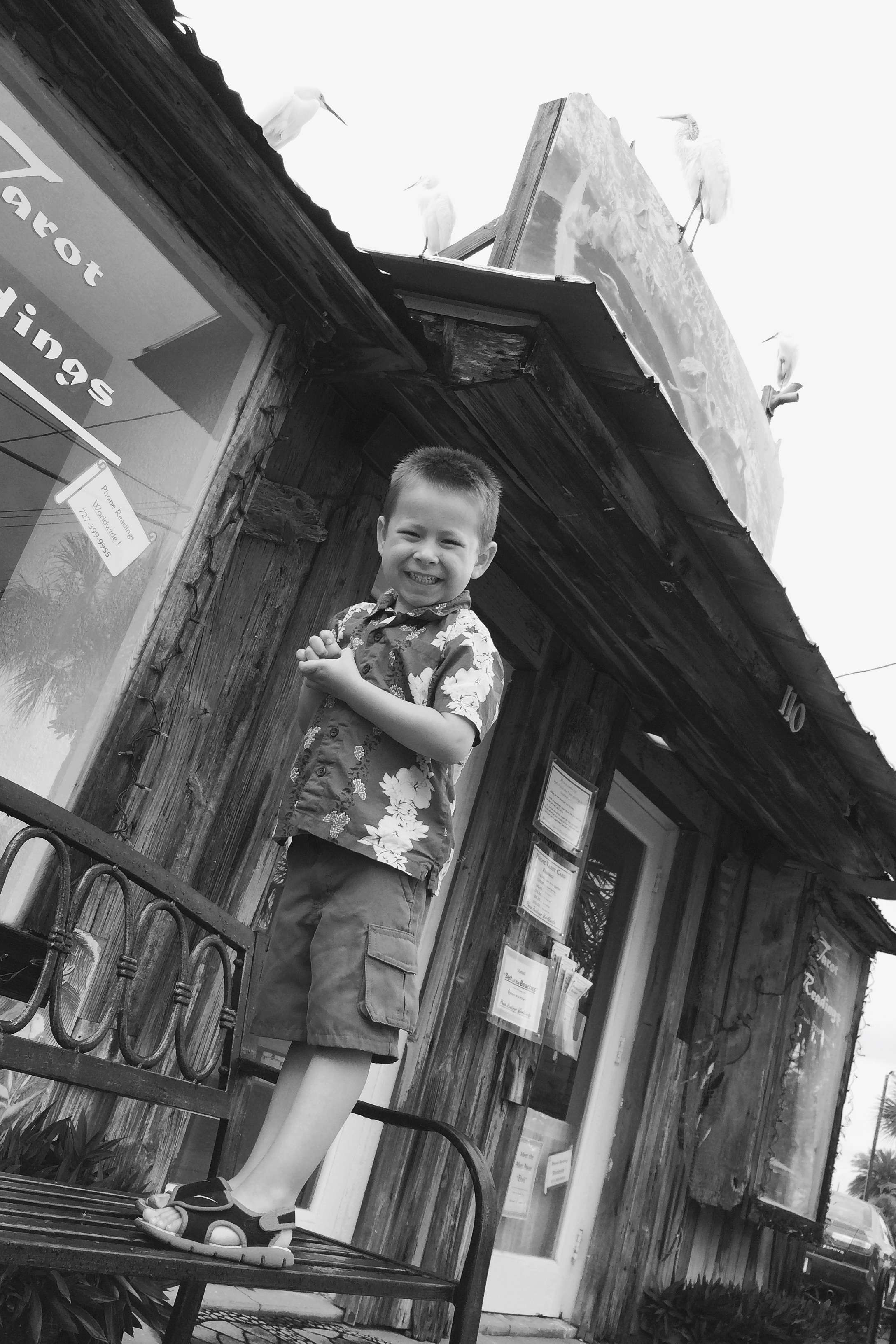 And, anytime I get eye contact when taking a photo… BONUS!

The last evening we were in Florida, the three of us (Grammie, Jasan & me) took a walk on the beach. (Note the pinwheel: if it spins, Jasan loves it. That was the purchase he wanted to make during our cloudy weather shopping spree.) 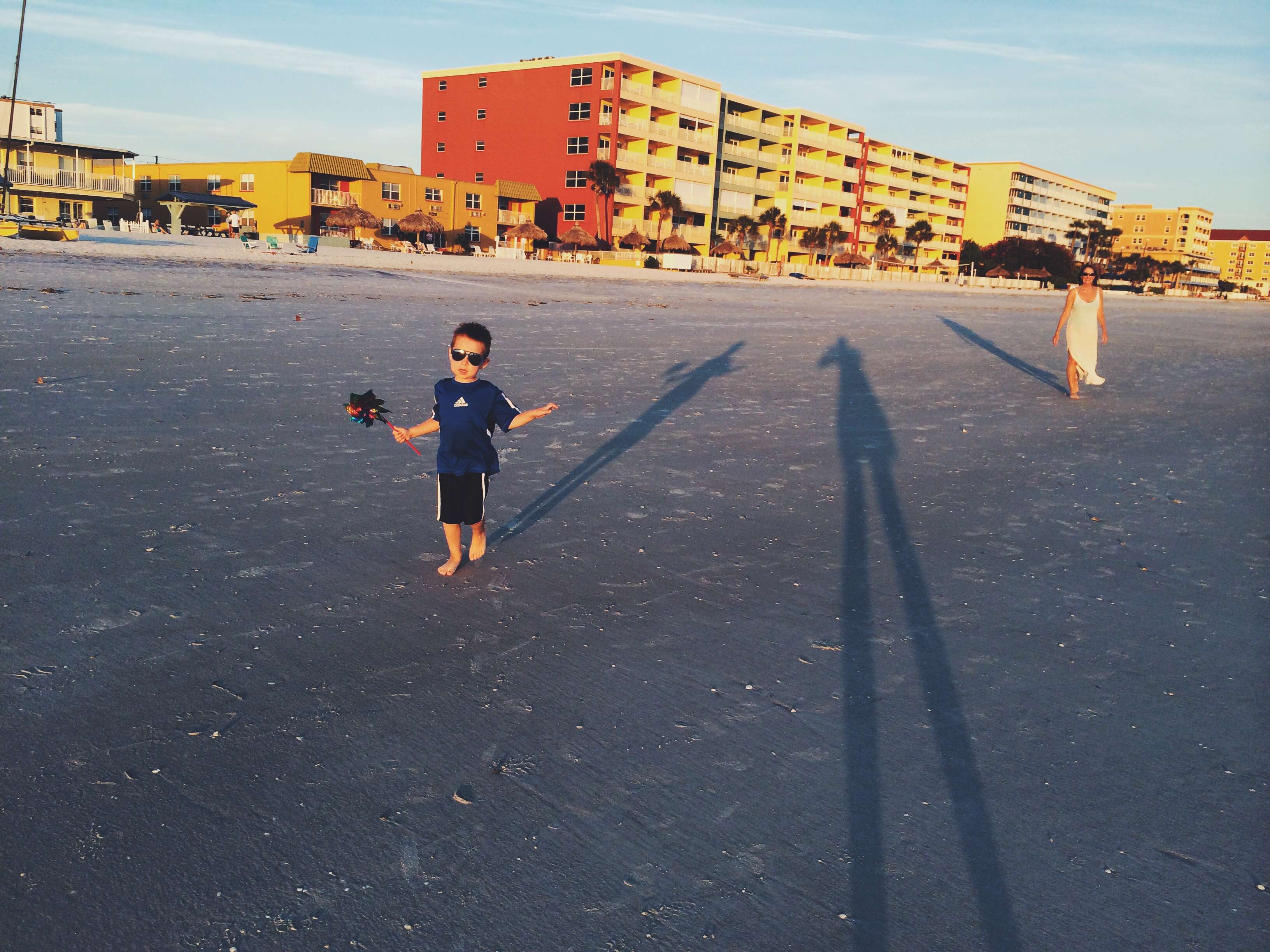 And then… THIS HAPPENED. 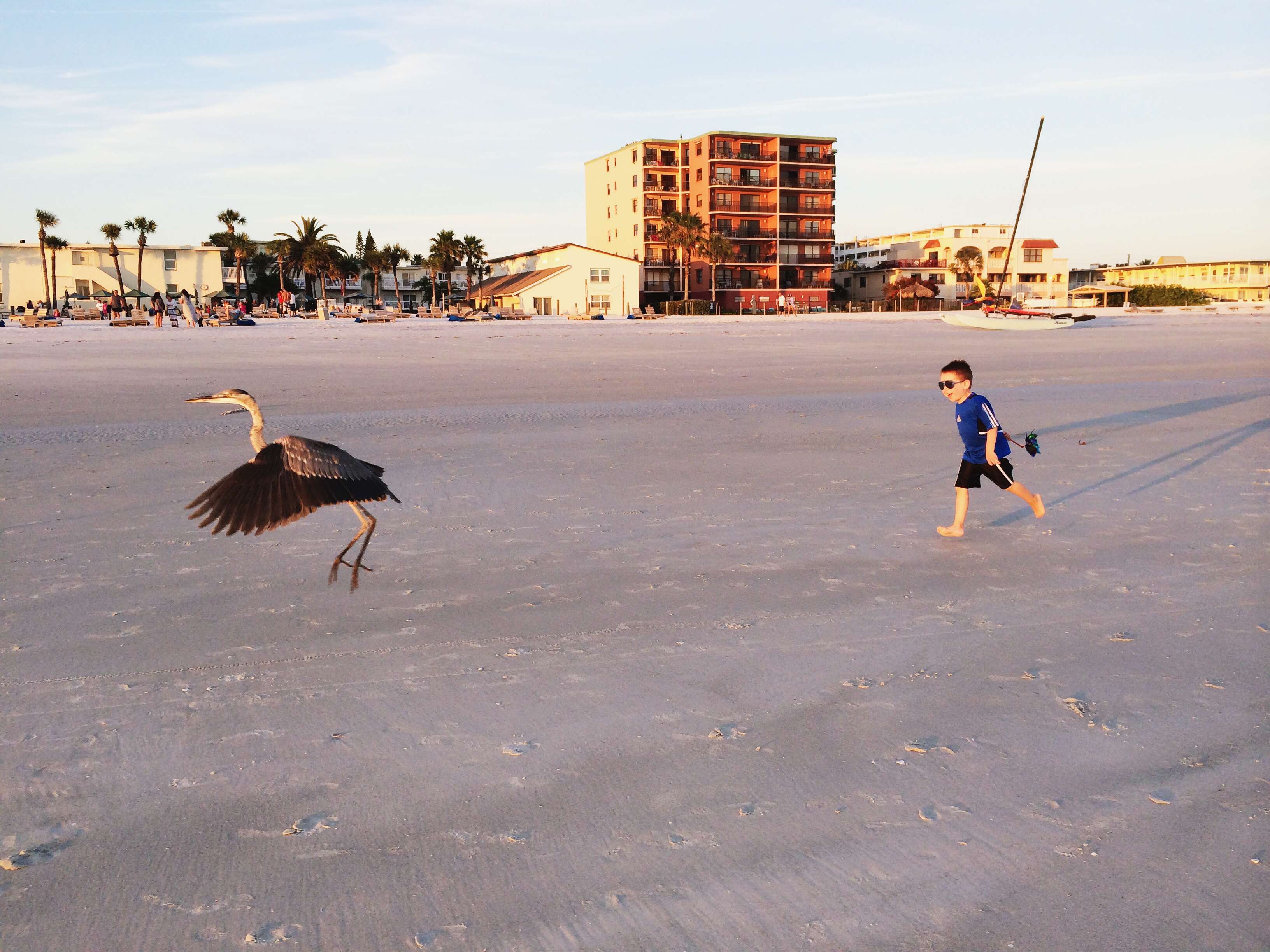 I was ready to shoot this time. 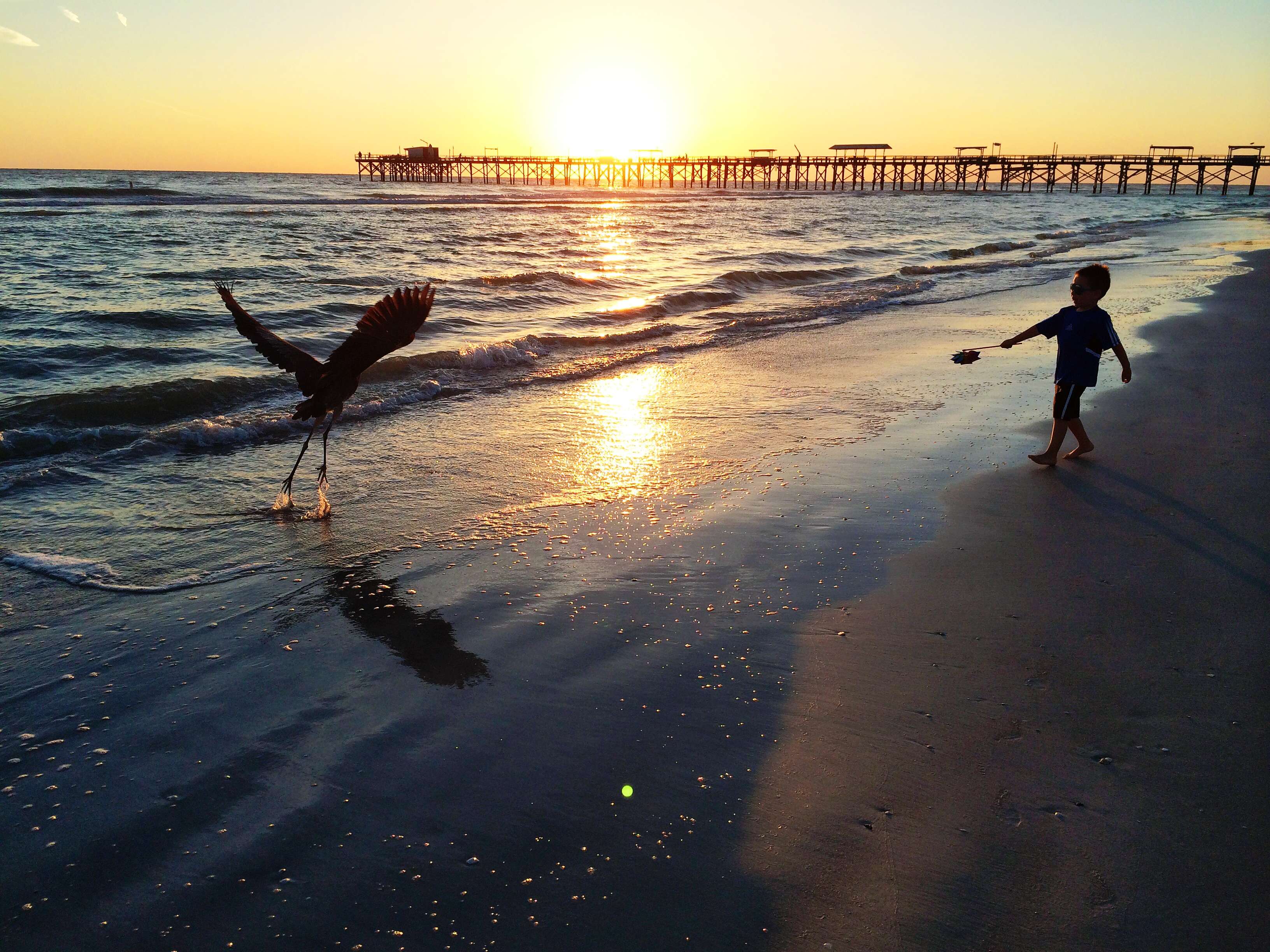 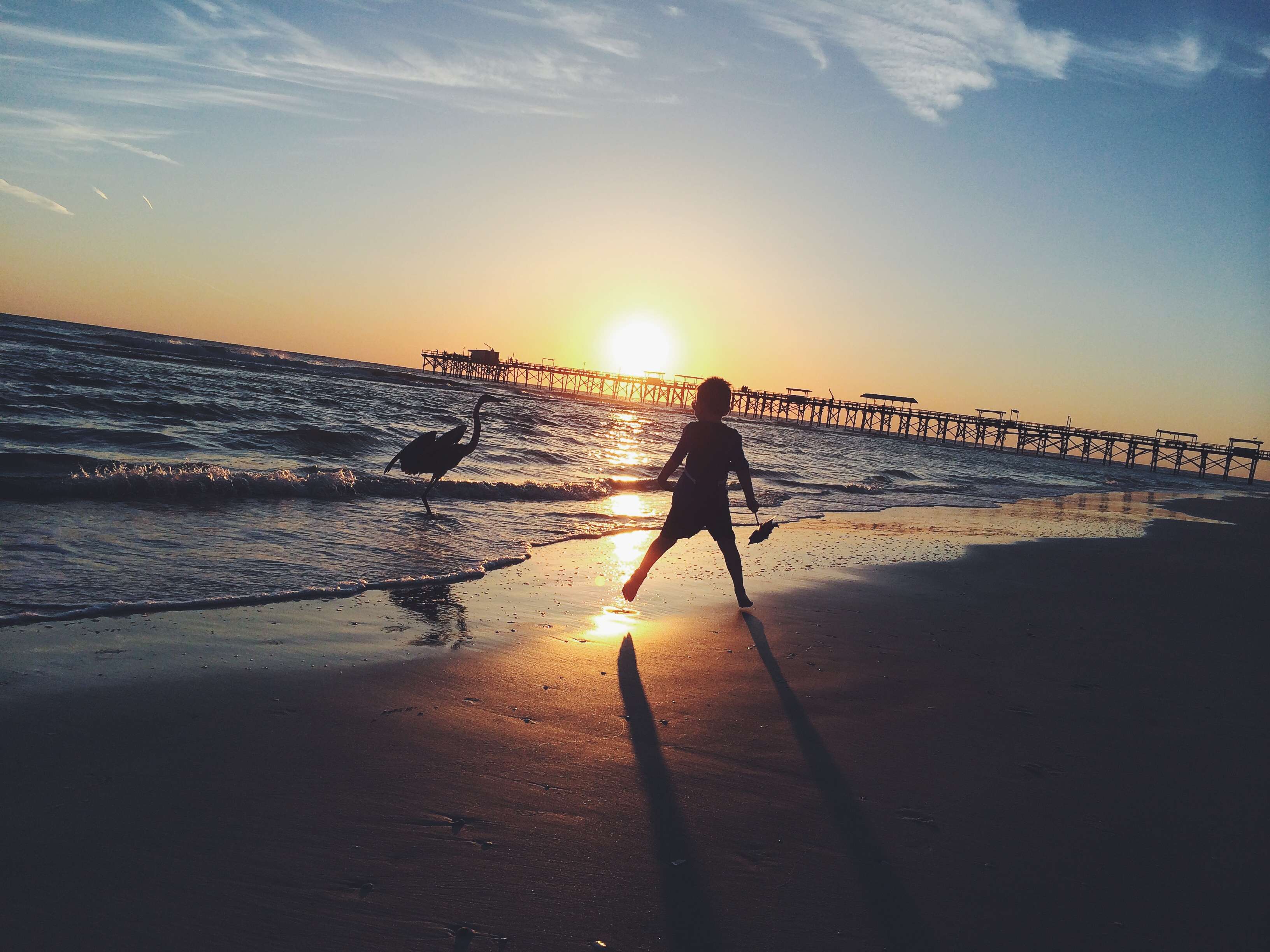 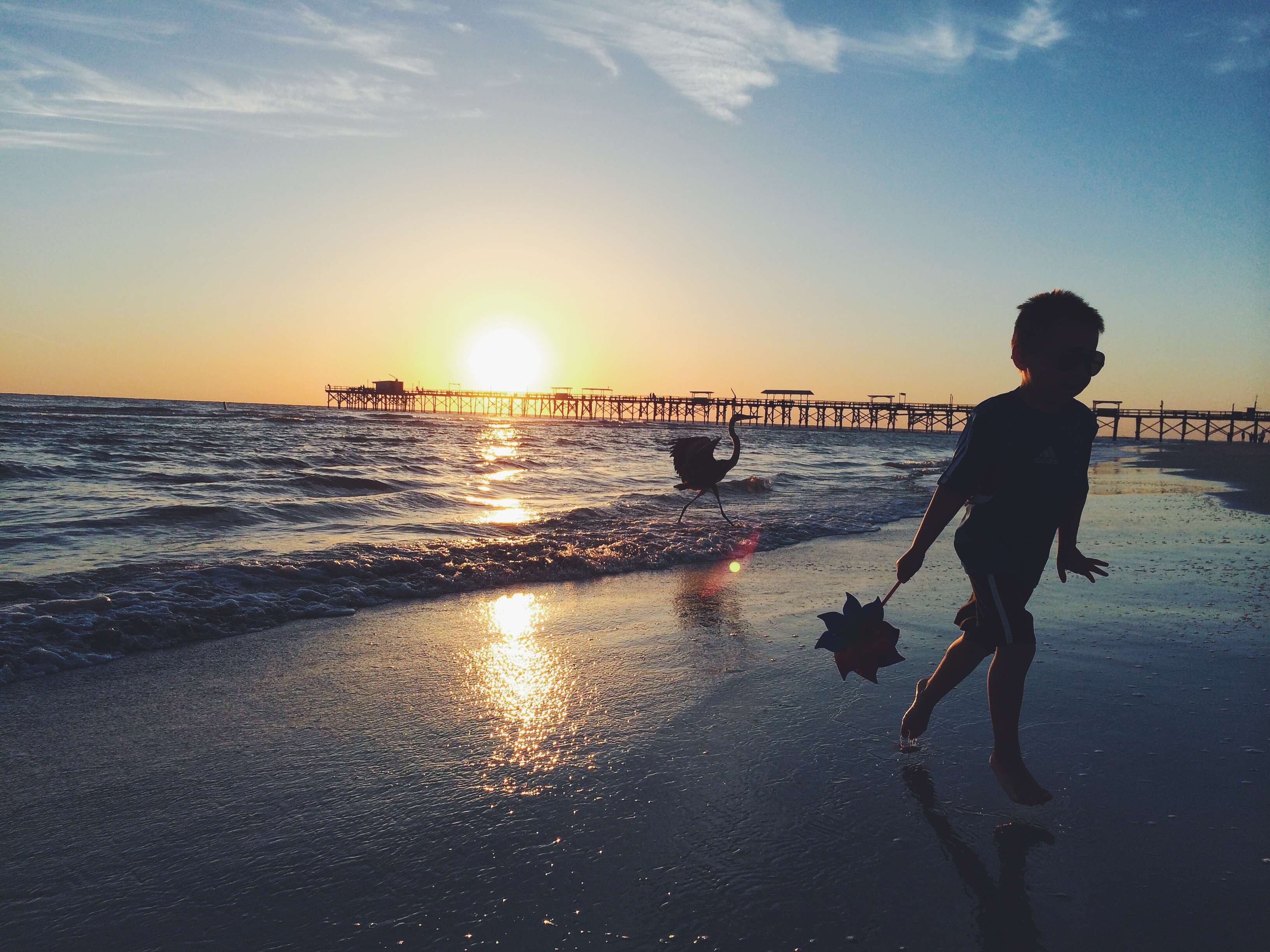 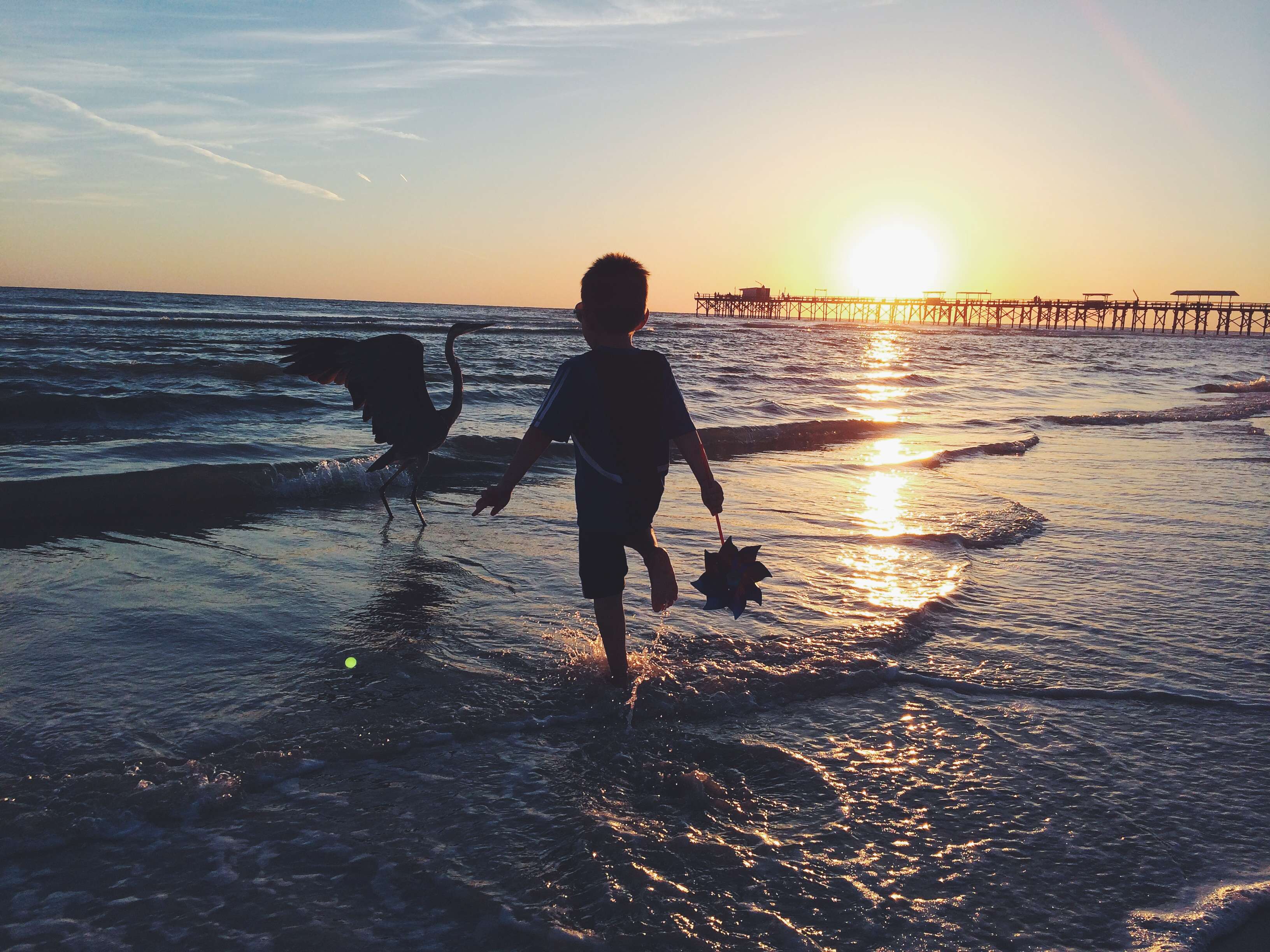 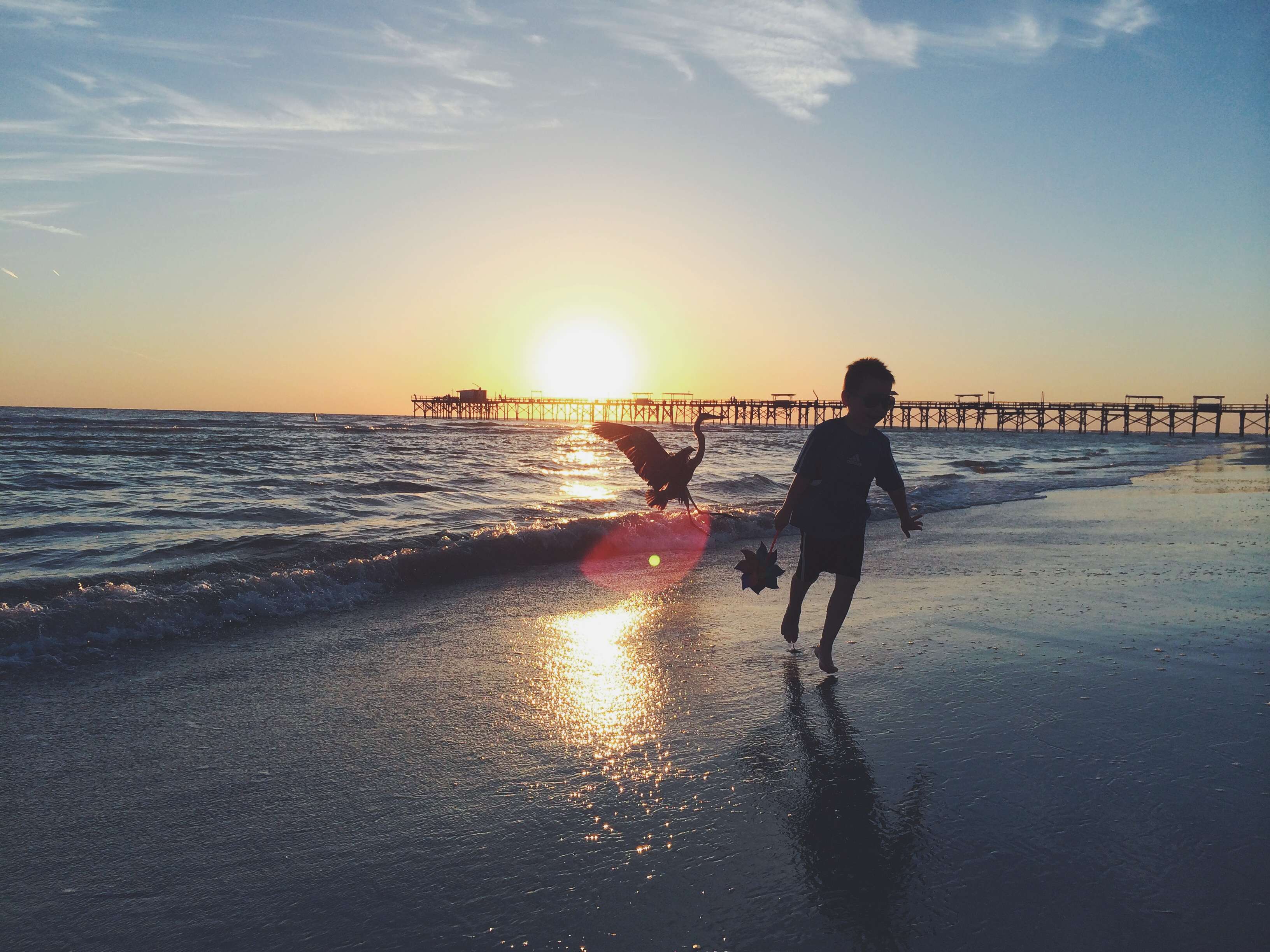 The chasing birds theme has continued even now that we are home in Illinois. It isn’t quite the same, but it makes us both smile… that’s what counts.